The barracks screen is where troops are created, housed and disbanded. In addition, this is where you will find information about your troops' activities, such as reinforcing, attacking etc. 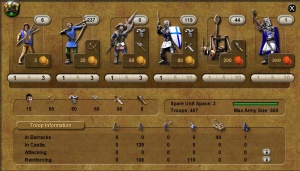 Unit space is calculated by the total number of troops & units you have in your village. Each troop takes up one (1) unit space; however, other units (Monks, Traders and Scouts) take up more space. Each village may have a maximum of 500 unit space - this number includes troops and other units.

Displayed next to each type are the resources and gold required to produce each troop.

The figure above each troop type shows the current number already commissioned, and which are either in the barracks, reinforcing, attacking, returning, or stationed in the castle. This figure does not show troops which have been stationed at vassal villages.

To disband troops: Click on the figure above the troop, set the slider bar to the number of troops to be disbanded, and then press the Disband button to finish. Disbanding troops returns the peasants but not the gold or weapons required to commission them. Only troops which are in the barracks may be decommissioned/disbanded.

Below the troops types is a series of icons, which show the available resources for producing troops (peasants, weapons, armour).

To commission more troops: The buttons below each troop type show how many of each troop may be built (1, 5, or the maximum with the available resources). Click on one of these figures to build that number.

The icons shown in the barracks are:

The total number of troops for the current village is shown here.