For every village and capital in Stronghold Kingdoms™, there is also a castle. The castle is where all defensive structures and units are placed to fend off, or at least attempt to fend off, any incoming attacks. In the centre of the screen is the keep, which may be upgraded by researching Castellation. The keep is the target for attacking armies, who will try to reach its centre in order to complete their missions.

The white square border around the castle shows the build zone. All defensive structures and troops, except Tunnellers' tunnels, must be placed within the build zone. There is a dark section of land around the keep when placing buildings which cannot be built upon. Likewise, attacking troops may only be placed outside this border at the start of an attack. 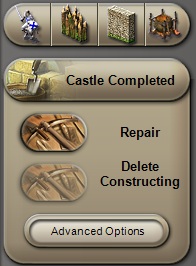 The castle is built in much the same way as the village. Once the required structures are placed, click the confirm button, found at the bottom of the interface to right of the screen. If you wish to cancel the buildings that were just placed, click cancel. Building castle structures takes time and requires resources from your village. Deleting castle structures before they are completed will return the resources required for building. Deleting any structures after completion will return 50% of the resources.

TIP: Build time may be significantly decreased by playing certain strategy cards, such as Master Mason.

TIP: An unenclosed castle incurs a -13 popularity penalty in your village, so do make sure it is enclosed at all times, particularly after attacks.

TIP: When placing Towers, Gatehouses and other castle buildings over already existing walls, there will be a gap in your walls until the building is completed. Be sure to take this into account when expanding your castle!

TIP: After an attack, repair your castle by clicking the building status button in the interface to the right of the screen, then click repair. Please see the image to the right.

TIP: Castle walls can now be dragged over existing walls when placing them to create intersections.

TIP: Stone and Wooden Walls can now be dragged out in the same way as Killing Pits and Moats using the Stone/Wooden Wall Block tool.

The Advanced Options function allows you to memorize and restore both troops and castle structure placements, as well as delete all castle infrastructure by different type.

Note: All "Delete All..." options do not work in the Parish Capital Castle. 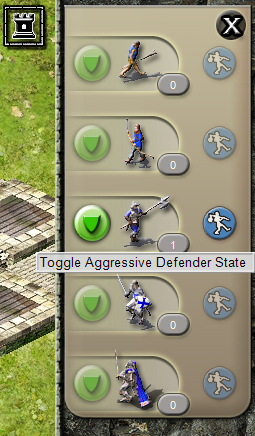 Troops are placed in the castle in the same way as structures. From the troops drop-down, select the troops you wish to place, and the formation you would like to place them in, then left-click on the castle screen to place the troop(s). To confirm the placement, click the confirm button at the bottom of the interface.

To move already placed troops, select them by left-clicking, then click the confirm button as before. This will return them to the barracks, and from there they will be available to place elsewhere. To select multiple troops, hold CTRL and left-click to drag a box around the troops you wish to select.

TIP: While troops are selected, by clicking on the shield icon, you can change their stance from defensive (green) to aggressive (red).

TIP: When a troop is placed, moved or returned to the barracks, it must be confirmed using the confirm button in the interface to the right of the screen.

You will notice a square white line around your keep. This line signals the start of an attacking force's countdown timer for both pillages and ransacking. This line also sets the area within which all castle structures are built. You may place castle structures and troops up to this line; however, tunnels may be placed outside it. During attacks, the number of troops crossing this line will determine the size and or amount of buildings being ransacked or pillaged.

TIP: It's a good idea to make the area immediately behind the white line as heavily-fortified as possible; the further away from the keep you can keep the enemy, the less damage they'll be able to do.