Catapults are offensive ranged units, used for damaging or destroying walls, towers and gatehouses. In order to gain access to catapults, you must be Rank 15 (Squire) and have completed the relevant research (please see the box to the right).

After placing catapults, you may either let them fire randomly, or select a specific target to fire at.

While they are selected, right click to a location within the enemy castle to set a target. 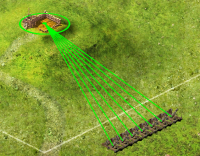 TIP: Try to defend your catapults when attacking another player's castle - they can be destroyed by armed peasants who emerge from tunnels, and mounted knights sallying forth.

TIP: A Captain with defensive troops and a delay command adds an extra level of defence.

TIP: Catapults can inflict heavy damage to your own troops by scattered friendly fire, as soon as rocks no longer hit walls or towers. Aiming Catapults diagonally to the intended pathway of the troops will illeviate some/all damage to said troops.

Catapults are built in the Siege Workshop, stored in the armoury, and are manned by peasants.

Catapult may be further researched to increase the firing rate, allowing them to fire more shots and do more damage while attacking.