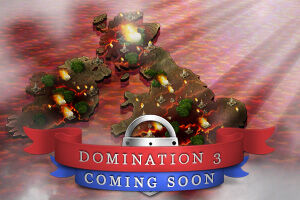 Hail and well-met noble one! This is truly a brave new world but please heed our warning: This new land is more brutal than any before it, with enemy Lords who are faster and more cunning than your average Knight. Houses are smaller and the fighting for prizes and immortal fame in the Hall of Heroes is sure to be fiercer than what you have seen before! While some of your old tricks and tactics may win battles, the war will be much harder fought…

At the core of the Domination World are the new gameplay rules which will differentiate this world from the previous domination world:

The are some rules from the previous domination world which will be in effect on this world.

There will be no Glory Rounds or Ages in this world. The House with the most Glory Points when the world ends will be declared the winner. Winners will have their names recorded in the Hall of Heroes, which can be viewed at [1]. The names, coat of arms and factions of faction leaders and officers are highlighted at the very top of the page, with the House Marshal given special treatment. All other players are listed below and sorted by faction.

Members of the winning House and those placed in the top 10 on any leaderboard will receive the following prizes when the world ends:

Players that reached the rank of Crown Prince or above - and failed to qualify for the above prizes - will receive the following prize when the world ends:

Please Note - Players who qualify for both of the above prize packs will only be given the first set of prizes. All prizes will be distributed at the end of the game world in 180 days.