Where are the Barracks and Armoury?[edit | edit source]

The Barracks and Armoury do not exist as actual buildings in Stronghold Kingdoms, instead they exist as screens, enabling you to build or deploy troops and weapons.

How do I build an army?

Once you have researched Command (Military research), you can begin to build an army of peasants from the barracks tab. It costs three (3) gold to create a peasant soldier.

How do I build more troop types?[edit | edit source]

You may build other troop types once you have completed the required Military research, and weapons research via Industry. You may also buy weapons from the market to arm your troops.

What does the Capture Village command do?[edit | edit source]

If successful, capturing a village allows you to take control of another player's village.

To send out a Capture, the appropriate level of Leadership research must first be completed, plus you must have a vacant village spot (please See the table of ranks for the number of villages you can hold). A Captain must also be included in your attacking army. For a Capture to be successful, your units and Captain must reach the keep. If the Captain dies, the Capture will not be successful, even if your army is victorious.

After the Capture, every building and resource in the village will become yours to own, regardless of your research/rank; although if you haven't already, you will need to complete the appropriate research in order to build more. Storage in your newly-captured village depends upon your own research; for example, if you can hold 30k Wood/Stone/Pitch/Iron and the person you are attacking can hold 50k, when you capture the village, your research will apply and you will only see up to 30k of each resource

What does the Raze Village command do?[edit | edit source]

In order to be able to attempt to raze another village, you need to be a Knight/Dame (rank 16) or above. Razing a village results in its destruction, and requires the attacking army to enter the keep.

TIP: Successfully razing any village will result in a large honour penalty.

What does the Pillage Village command do?[edit | edit source]

Pillage commands your army to steal resources from another player's castle. The further in your army penetrates, the riskier the pillage but the greater the reward.

TIP: Research Vaults to protect your own castle from being pillaged. The higher the level of completed research, the more difficult it is to be pillaged.

TIP: Each troop can carry 1% of the goods to be pillaged. In order to receive the full amount of goods from a 90% pillage attack, at least 90 troops must survive the battle.

TIP: The amount available to be pillaged can be increased through Military / Pillaging research.

What does the Ransack Village command do?[edit | edit source]

Ransacking will destroy a number of buildings within the village you are attacking. The further in your army penetrates, the riskier the attack, but the more buildings will be ransacked.

TIP: Ransacking players will result in an honour penalty. The lower the rank the more honour it will cost.

What does the Vandalise command do?[edit | edit source]

This only allows the player to attack a castle and doesn't take anything or capture anything. The troops will not stop until they reach the keep or die trying. This is the basic attack, and is available without research.

Why didn't the attack report contain any information about the enemy castle?[edit | edit source]

Only attacks that survive long enough, will generate a report that includes information about the enemy castle.

Can attacks be cancelled?[edit | edit source] 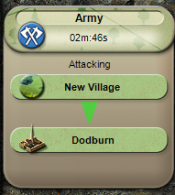 Player to player attacks may be cancelled, but only within the first five (5) minutes of sending.

Player to Enemy AI (castles, Wolves, etc) may be cancelled any time.

What is the maximum army size?[edit | edit source]

Is there any way to gain more than 500 troops?[edit | edit source]

How can I remove troops (disband)?[edit | edit source]

To disband troops, click on the barracks screen icon at the top of the page. Select the troop you wish to disband and click on the number in the top right of the troop type window. Troops to be disbanded must be in your barracks, not reinforcing, attacking, returning, or placed in the castle. Troops stationed in vassal villages do not count against your maximum, therefore cannot be disbanded.

Why can't I disband my troops?[edit | edit source]

Your troops may be out attacking or returning from an attack in the map screen, you cannot disband troops that are away until they are in the barracks.

Why isn’t my army moving any faster after research?[edit | edit source]

Armies already travelling across the map are unaffected by recently completed research. Research only affects armies sent after it is completed. This also applies to capital armies when using capital town buildings.

I sent troops to the capital but they didn't appear?[edit | edit source]

Some villages cannot be attacked for various reasons. If the village is in Peace Time, other players will be unable to attack them. Players also cannot attack a village which has been interdicted using Monks. Members of the same Faction may not attack each other.

Can I get ballistae or extra defenses for my village?[edit | edit source]

Yes, providing the following defensive buildings re built in the parish capital:


If these buildings are donated to, they will allow all villages within the parish to place this defense equipment, so it makes sense for every village in the parish to donate goods.

The Ballista Maker allows all villages in the parish to place up to 10 ballistae in their castles. Ballistae are an excellent form of defence against catapults.

The Turret Maker allows all villages in the parish to place up to 10 turrets in their castles. Turrets are an excellent form of defence against troops.

The Tunnellers' Guild allows you to place one tunnel outside the white line of your castle, from which peasants will emerge behind enemy lines with the intention of destroying enemy catapults.

TIP: You do not have to station peasants in your castle to be used a tunnellers.

Can I have details of troop advantages?[edit | edit source]

Peasants - Cheap to produce. Good for taking out wolves and bandits, plus attacking enemy castles en masse in order to dig up moats and take down walls.

Archers - Ranged weapons - Great for defence on towers etc - Not strong in hand to hand attack - Useful protection for peasants (see above).

Catapults - Immobile - Great for pounding down walls - Weak defence, as they are unmanned when attacking.

How can I see reinforcements ?[edit | edit source]

What does the green and blue flag signify on the Castle Window when choosing units to place?[edit | edit source]

Green units signify reinforcements (from your or another player's Village/Parish) or your Liege Lord's vassal army.

Blue units signify your own troops.

How come I was attacked while my village was in Peace Time?[edit | edit source]

Players' villages can still be attacked by Enemy Siege Camps while their village is in Peace Time.