Are there any other ways to gain food/resources?[edit | edit source]

Resources may be foraged, or pillaged from other players.

How do I scout resources?

First you must research Scouts, then build a scout from the units screen. On the world map screen you will often see resource stash, which can be scouted and foraged.

Being the first to reveal stashes within your honour circle will net extra honour, based on your rank. Previously uncovered stashes will only net the resources within.

(A ) In order to scout a stash, on the world map, you must first click on the yellow shield above the village from which you wish to send the scouts, then click on the stash you wish to retrieve.
(B ) You can also select the village to send scouts from via the top right-hand drop down menu.
(C ) A small window will appear, allowing you choose the number of scouts to send, the time it will take them to get to the stash, and whether it will yield honour or not. If the stash has already been uncovered, a small icon will appear next to the go button, showing the contents of the stash.

What are the bags with the question marks on them?[edit | edit source]

These are resources which have yet to be scouted. If you are the first player to scout them, you will receive a small honour bonus, as well as the resources.

Can scouts do anything else?[edit | edit source]

Scouts can be used to scout other players' castles, and enemy AI castles/Paladin castles/bandit camps/wolf lairs.

If I scout another player, which information will the scout return with?[edit | edit source]

If a scout is successful, it will return with the layout of the castle and the placement of its troops at that point in time; if you then attack that castle, you can use the View Castle button to see its layout. You may also view the layout if you have been sent a scouting report by another player.

TIP: You will only see the castle layout and troop placement for the moment it was scouted/attacked; changes made after that will not show up.

No. The success of the scouting mission depends on the number of scouts you send, the level of the defending keep, the number of defensive archers, and a bit of luck.

Why aren't my scouts moving any faster after research?[edit | edit source]

If you finish the research after the scouts have started moving on the map, the completed research will not affect them.

Can scouts be cancelled?[edit | edit source] 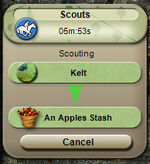 Yes, they can be cancelled.