What is a vassal?[edit | edit source]

The liege lord must be a higher sub rank than a vassal; if the vassal reaches the same sub rank as the liege lord, the vassalage will be broken, and all vassaled troops will be lost.

How do I make someone my vassal?[edit | edit source]

Select a village on the map and click the Make Vassal icon. A vassal request is then sent to the player. If the request is accepted, the player becomes the vassal of the liege lord. You may only send vassal requests to players with a lower sub rank than your own.

How many vassals can I have?[edit | edit source]

The number of vassals each player can have is affected by their rank. A player may have one (1) vassal once they reach the rank of Freeman (8), up to a maximum of 69 vassals, once they reach the rank of Crown Prince (23). While vassals and liege lord relationships are made between two (2) specific villages, the number of vassals a player can have is per player, not per village.

How do I gain honour from a vassal?[edit | edit source]

If you have troops stationed at a vassal's village, you will gain honour from using these troops to attack AI castles/wolf lairs/bandit camps within your vassal's red honour circle. 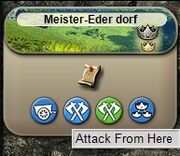 Attacking from a vassal
Retrieved from "https://strongholdkingdoms.gamepedia.com/FAQ:Vassals?oldid=4992"
Category: