Quests are tasks that are undertaken by players in which they achieve certain targets in order to attain different rewards for completing those targets. Some Quests, but not all, appear multiple times but the targets and reward increase with each level.

Quests are started by individual players whenever they see fit and remain active until they are either completed or abandoned by the player.

Note: Abandoning a Quest will lose any progress that was achieved while the quest was active. Restarting the Quest will do so from scratch. 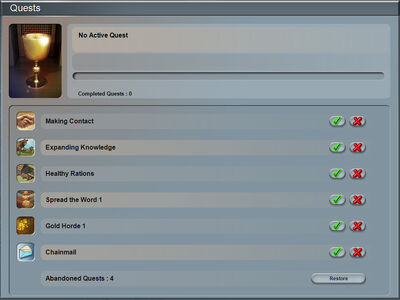 Quests can be viewed, activated and abandoned from the Grail icon on the top menu bar of the main Stronghold Kingdoms interface.

Not all Quests are available to players at once. Quests become available as the player ranks up and also when previous Quests are completed.

Whenever a Quest is completed, the Grail icon will flash and the user will receive a report informing them that they have completed the Quest. The user can then redeem their reward.

By clicking on the Text in the Objective players can access the Quest Help Text. This text will give players additional information about Quests and the requirements for completing them.

Players are rewarded for completing all Quests in the game. The rewards vary for each Quest but can be one or more of the following:

Resources and food rewards require the player to select which village they would like to redeem the reward for.

Later Quests give the option between one of two rewards. The player decides which they would like to receive when redeeming the reward.

If a player chooses the glory points for his or her house as a Quests reward, a confirmation message will appear in the Quests screen (A). The player and the officers of his/her house will receive a report, which will show the number of point received, if the Glory points are selected as the reward (B).

If a there is not enough room to store all of the rewards from a Quest in your Granary or Stockpile, you will be presented with a confirmation screen.