Rise of the Wolf 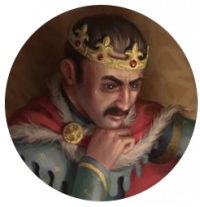 I am afraid that I am the bearer of grave News My Lord..

Your spies bring word of approaching sieges,from a place different to our lands or any kingdom your armies have touched thus far.

Each day more villages are razed and captured by forces led by an age-old enemy, with attacks on all sides even from nearby countries!

In order to overcome this new threat, old tricks and tactics may need to be abandoned, if we are to survive the coming battles.....

About Rise of the Wolf

The Rise of The Wolf is a special game world featuring classic Stronghold characters, improved AI and PvE (player-versus-environment) gameplay. In Rise of The Wolf players are randomly assigned a location on a medieval map of the British Isles. Forced to cooperate and hold back a tide of attacks from The Wolf, The Snake, The Pig and The Rat, who have returned to take vengeance against the people of Britain. Players must fight for both lands lost to the invaders and for the support of the people. Only by engaging enemy troops to take back villages and winning votes in the political arena, right down to the level of each parish, can players hope for sucess.

At the core of the Rise of the Wolf are the following changes to the gameplay :

The House that earns the final Glory Race star will be announced as winner of Rise of the Wolf and receive ‘The Wolf’s Hoard’:

We would like to thank everyone who took part in this unique Stronghold Kingdoms experience and announce that it will not be the last of its kind! RotW provided valuable insight into how PvE focused combat could be a fun twist on the established Kingdoms gameplay.

Return of the Wolf

About Return of the Wolf

This is not an Era world type. This world will not go through Eras or have a Final Era.