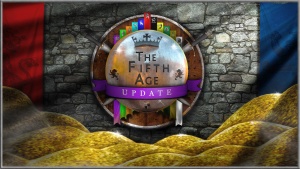 The Fifth Age gameplay changes will allow players to increase their castles’ defensive capabilities and deliver greater riches to their Kingdom. It will also bring significant changes to established political systems and the way in which Houses earn Glory for their conquests.

The following rule set will affect players in this new Age:

NB: Please note that all features of the game world other than those mentioned above will remain as is at the time of the start of the fifth age. Players will retain all their villages, research, cards, points etc.As with every Age transition, all Factions and Houses will be disbanded at the beginning of the Fifth Age. The capital forums will be cleared and all players removed from their elected positions.

Players who were members of the victorious house of Age 4 at the time they won the final glory round will receive the following prize at the beginning of Age 5: