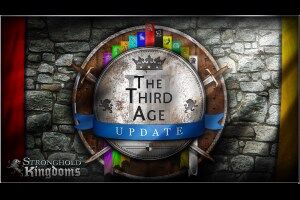 features increased caps for villages and parish upgrades, faster honour production and rebalancing of the Glory Race. With faster production, fresh alliances and new rules, this new age is designed to increase the pace of gameplay and give players more freedom to extend their power and influence within the world…

Once a world in the Second Age completes its Glory race, which occurs when there is only one House remaining, the remaining House will be declared winners and a start date for The Third Age will be announced.

Once The Third Age begins, a number of features throughout the game world will be reset to those of a new world. These are:

NB: Please note that all features of the game world other than those mentioned above will remain as is at the time of the start of the third age. Players will retain all their villages, research, cards, points etc.

In The Third Age the amount of glory gained per day is changed as follows:

In The Third Age a House needs four million points to win the round.

NB: As with Age 2, once a building is deleted from a capital, the capital does NOT retain the bonus from the upgraded building.

The winners of Age 2 will receive a Champion Pack.

Upon victory they will receive:

Once the new age opens, the Winners will receive: