Treasure Castles - are AI castles which will randomly appear in a Parish. Unlike normal AI castles, Treasure castles do not send out attacks and will disappear once all treasure chests within the castle have been taken. Also unlike normal AI castles, the goal of an attack is not to kill the enemy troops or to enter the keep, but to carefully and strategically place the attacking troops so that they uncover a treasure chest hidden within the castle. Treasure Castles present a unique puzzle for players to solve for a chance at valuable in-game rewards. The reward for successfully attacking a treasure castle is related to the level of the castle, the castle has a difficulty rating from one to fifty, fifty being the hardest. Once a player sends an attack at a Treasure Castle, they may not attack any Treasure Castle again for twenty four hours.

Treasure Chests, while visible to the player in the castle, are below ground and cannot be seen by troops until they are on an immediately adjacent tile. If attacking troops do not walk over a Treasure Chest they will walk toward the keep as normal and the player will not receive a reward from the attack.

Attacking a Treasure Castle and capturing a Treasure chest will give you a chance of getting a certain tier of wheel spin. Tiers can be from one to five, the player has a chance of receiving one of these levels after the troops hit a chest.

If you have successfully attacked a Treasure Castle you will receive a report showing which tier of reward you have received. 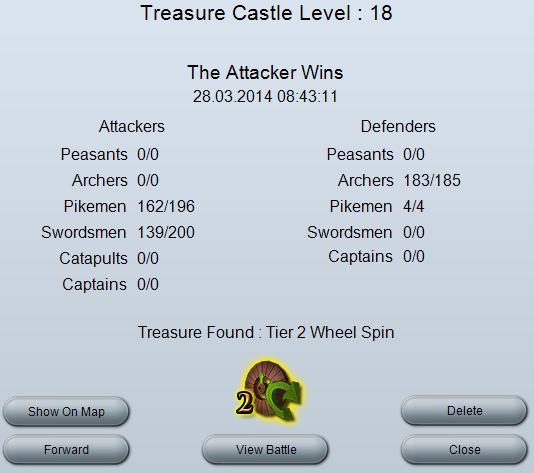 As indicated in the report you can access these wheel spins by clicking on the wheel spin icon on the world map.

TIP: Reaching the keep does not destroy the castle, as with other AI. A Treasure Castle is only destroyed when all chests have been uncovered.

TIP: No honor is received for attacking or destroying a Treasure Castle.

TIP: Treasure Castles will be cleared from the map after 7 - 14 days.

TIP: Treasure Castles are only attackable from player villages, not capitals.