All worlds play independently of the other Stronghold Kingdoms™ worlds and, as such, all game features (except players' Coat of Arms) exist separately from World to World. Any Crowns, Strategy Cards, Card Points, Premium Tokens and Card Packs purchased by players will be available within all Worlds. Once played, Premium Tokens and Strategy Cards will only affect the World within which they are played. 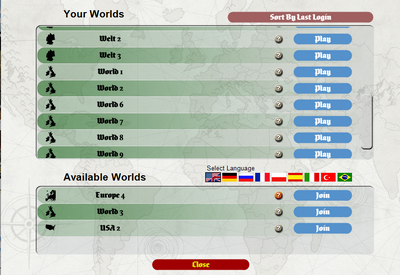 After logging into Stronghold Kingdoms™, players can join any of the game Worlds by clicking on the Select World button and then joining a World. Different language Worlds are available from clicking on the respective flag at the top of the Select World screen. Checking the Always show worlds you are playing will display all Worlds previously joined at the top of the list, irrespective of the language of the game world.

Each regular game world goes through seven unique Eras which bring exciting gameplay challenges to test players‘ skills! Ultimately, the fate of the world is up to you! In the Final Era, players will get to decide if they will continue the game world or end it and collect the fabulous prizes.